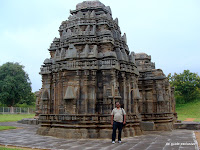 What better way to spend weekend getway and series of holidays to dig into our legacy and heritage. It is worth traveling a 1000 kms on a round trip from Bangalore to Bandalike. Enroute if one can enjoy the nature and adventure of trekking it is an added bonus


Bandalike is currently under final stages of resurrection or renovation by the ASI. After involving in refurbising Angor Wat in Cambodia, ASI has gained substantial experience in bring back the crumbling edifices to unravel the story of the times.

According to the Gazette Bandalike is considered to an ancient ruined and deserted village north of Shikaripur. The missing link to unearth the history of Bandalike is provided by an inscription, which mentions that the place was ruled by wise old Chandragupta. There are more than 30 odd inscriptions written in old Kannada and Sanskrit ranging from 834 to 1369 Saka era. The inscription found dates back to many dynasties associated to this place. They are Rashtrakutas, Chalukyas, Kalachurias, Hoysalas, Yadavas and Vijaynagar Empire. After the defeat of Vijaynagar empire in 1565, Bandalike was subject to rampant arsenal and looting plundering all its wealth. Most probably the earlier vandalism took place at the time of Malik Kafur in 1321 AD, who was a general famous for raiding looting the wealth of all South Indian temples. 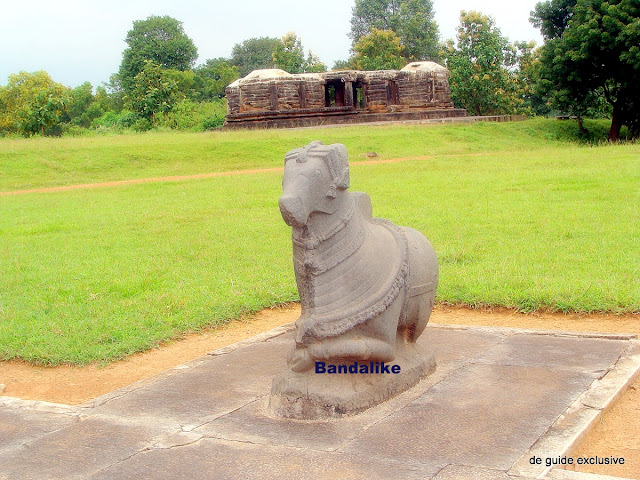 My surmise is that Chandragupta Maurya ( 324-298 BC ) when he abdicated his throne in favour of his son Bindusara in 298 BC. due to his conversion to Jainism. His guru happened to be Bhadrabahu. The guru through his nimitt gyan could forsee the advent of a decade filled with famine in the near future in Magadh empire. He alongwith his followers decided to relocate down south. Chandragupta migrated towards south along with huge followers of Saint Bhadrabahu. They migrated first to Bandalike . During their stay they got Basadis constructed in and around Bandalike. They spent 2 years at Bandalike meditating and teaching in the schools. In the meanwhile they were looking for a safe place and they re-located Chandragiri down further south to establish their base. An advance party was sent to establish the infrastructure at Shravanbelagola to settle down. Thus Bandalike is an important heritage centre and deservedly needs resurrection and maintainence.

The location is spread over 40 acres of landscape in Sorab taluk of Shimoga dist. which happens to be constituency of our ex CM Bangarappa and our current CM too is elected from nearby Shikaripur taluk. When two heavy weights are present we hope the infrastructure will be developed for tourists to conviniently reach the elusive destination. One has to definitely enquire his way to reach this destination. One approach road is through Shiralikoppa route, next approach is from Belligavi and the final approach is from Chikri route if one is travelling from NH 4. The roads can be treacherous in monsoon with vehicle taking a hit on the underbelly or getting stuck in the muddy swamps. 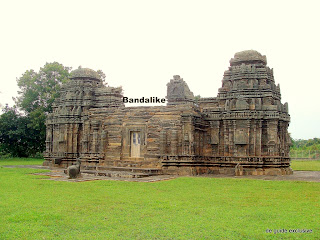 Veerabhadra Temple : On the north east corner Veerabhadra temple who is an avataar of Lord Shiva is built. This temple is dated 14th century obviously belonging to the Hoysala heritage. The image of the diety seems to be well embellished with weapons of destruction such as arrow, sword and protective shield. The image of mahisasuramardhini is located on the the mound along with another goddess with four hands.

Someswara Temple : This temple is constructed in old Chalukyan style. It is built in 1274 AD as per inscription. Boppasetti ( to be read as Boppaya Shetty ) is credited with the construction of the temple. This temple has two beautifully well sculpted perforated window channel. It served the dual purpose of protection against vandalism and cross ventilation. The window has various dieties, swans, lions etc adorning the panel. Episodes of Ramayana and Mahabharata are also featured on the facade of the temple.

Just behind the temple there is a mahanavami mantapa is located. This mantapa was used during the dusherra celeberations to rever the DEVI on an elevated platform. The idol is missing. It was constructed by Malla Dandanayaka in 1209 AD as per instructions of the Hoysala queen Abhinava ketaladevi ( wife of Ballala II )

Trimurthi Temple : A triple cellular structure belong to the later chalukyan era and constructed during 1160 AD. ( It may even belong to the Rashtrakuta era if datelines are little off track ) If we go by dateline than Western Chalukyan emperor Tailappa III ( 1151 to 1164 AD ) can be credited to the construction of the temple. The towers of the temple do not possess the Hoysala symbol, and the western gopuram has collapsed. Two other gopurams have withstood the ravages of time and ransack. One projection is of the simhalalata. This temple has a close resemblence to the Chatteshwara temple at Chatachattahalli near Halebid. The temple has been completely resurrected with a small Nandi adorning the enterance on the east. A figure of lord Vishnu adornes the north cell.


Shasharlinga Temple : This temple was constructed by Macchayya Dannayaka in 1063 AD. It is obviously dedicated to Lord Shiv with a big linga. 999 square lines represent the multiple lingas.

The chief diety of Bandalike is Goddess Banashankari ( formerly called Mayadevi ) A small temple is dedicated to the goddess. According to traditional belief of the times Mayadevi was sent by goddess Parvati to meet Allama Prabhu, who changed her into a divine form. Chanchala Odeya is stated to be one of the sponsorers for the development of this temple according to inscriptions in 1387 AD. There is a sati memorial for two wives who burnt themselves alive on the death of their husband. Ruins of some unknown temple too can be seen.

At Rasabhavi temple there is an idol of Hanuman and a slayer with a chopped skull is witnessed, locally known as siditale koduvudu 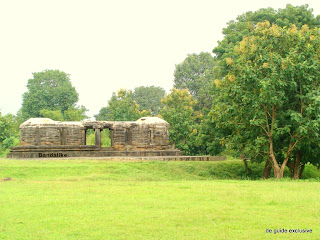 Shantinatha Basadi : A prominent Jaina temple is located on the right side of the tank known as Nagara kere or Nagateerta. This is known as Shantinatha Basadi, which is probably controversial, since it belongs to 912 AD which refers to fabled emperor KRISHNA II ( 878 - 914 AD , who built the famous Ellora cave, reign of the Rashtrakuta empire. An inscription states one Jakkiyabbe gave donations for up keep of this basadi. The basadi title was incorporated due to the renovation of the temple in 1200 AD. The image in the sanctum sanitorium is missing. A mutilated Jain teerthankara is found here and two statues of Lord Vishnu is also found.

My premise is that Bandalike, Belligavi, Belur and Banavasi must have been an inspiration for Suryavarman to build the world famous monument of Angkor Wat in Cambodia. During his visit to India during the reign of King Vishnuvardhan from the Hoysala dynasty to attend his wedding must have opened his eyes to build an edifice for future generations to cherish. How I wish that Bandalike too is ressurected to that standard ? giving us a glimpse of an era which was rich in using the elements of nature to its hilt.

The complex consists of the main temple which can be a Shivalaya temple with trikuta or gopurams. One gopuram is partially missing. The enterance is guarded as it were by a crumbling Nandi which is hardly 3 feet in height. On the facade of the temple one gets to witness the elementary gopuram or mantaps at eye level, with figures of god and godesses missing as it were. There are inscriptions in old kannada and sanskrit for scholars to re-discover.

Apart from the main temple the complex consists of 3 other crumbling edifices which have been beautifully resurrected by ASI, one is distinctly of Jaina style, another is Shivalaya and last one is probably dedicated to Lord Vishnu. One complex is secluded from this multiplex as it were, which is supposed to be a basadi, which was locked, and i had to climb over the gates to re-discover. One may get mislead by this single monument, have patience to discover the main complex. Only the villagers can guide.........like a shepherd guiding the flock. In fact I found a shepherd herding his flock of sheeps grazing the landscape at Bandalike. Another strange feature i found a an old man almost like a ghostly figure in midst of the field.( On the hindsight the ghostly town has some history ) Inorder to confirm that he was not I shouted for direction for further clues, and in reply he replied move on. It was just an hunch I drove to the main complex which was the filled with monuments and inscriptions. The greenary and landscaping was a visual treat for the eyes. Eureka ! it was a heady feeling with heavens too showering us with its bounty of mild rain to literally clearing the bad light and thick cloud cover for photography.

It was an absolute thrilling rendezvous as it were to discover an exclusive destination, which has not been covered in any of the travelouges as on date except vaguely without pictures or details. I hope you all too will enjoy the journey to this destination called as Bandalike........a heritage unparalled in history. It is a pleasure to unravel the newest destination to travel buffs for previewing before it is officially thrown open to the public with full details by ASI. Some inferences are matter of conjectures based on historical dateline, which is an original contribution.

NOTE : Bandalike has a potential to be resurrected like Angor Wat with plenty of water channels available in the vicinity and good rainfall legacy. Maybe in olden days it was close to Angor Wat terrain.

SIDELIGHTS : The surprise findings of Bandalike being associated with Kalamukha sect of Shaivism is an enigma of a forgotton practise. Kalamukha followers are basically tantriks who believe in appeasement of Lord Shiva with Human sacrifice.

Kalamukhas are considered to worship extreme form of Shiva known as Bhairava. Bhairava used to frequently visit the crematory completely nude with skulls hanging by their waist to protect their phallus. The skull sometimes acted as a begging bowl, and eating bowl. This ritual is supposed to be a pennace for slaughtering one of the heads of Lord Brahma in anger. The followers are accused of conducting surreptiously human sacrifice. Ujjain was a prominent centre for Kalamukhas and we derieve the information on the tantric practises from incriptions of Kaedeswara temple (1162 )AD.


Update : I happened to personally visit the ASI office and cullout more information on Bandalike on 13/10/2009, which i have updated. Acknowledge the help of ASI for this travelouge

Disclaimer : Folks dont blame me for your nightmare that you have visited a ghost town inspired by my travelouge. Lol
Posted by De Guide Travelouges at 7:59 PM

Email ThisBlogThis!Share to TwitterShare to FacebookShare to Pinterest
Labels: Bandalike

De Guide Travelouges
Basically a marketing person with interest in travel and exploring destinations and bring the hidden gems for the benefit of fellow travellers. Currently into domestic airticket booking and allied tourism services

Earlier under the Vijaynagar empire Karnataka referred to larger part of southern India but now is restricted to the present status. The rich heritage of Karnataka is descended from the era of ancient mankind upto the reign of Tipu Sultan. The British modernised Karnataka into a Cantonment. According to me it is the Land of Kamasutra with exposition of erotic sculptures at Aihole, which is almost 600 years prior to Khajuraho group sex. Tourism in the state is not restricted to temples but extends to Forts, Palaces, Beaches, Antiques, Sandalwood, Honey, Agarbhatti, Spices and Medical facilities. It is also commonly referred to as Silicon Valley of India. All the Infrastructure will be in place by 2014 AD, if the world survives the doomsday soothsayers.